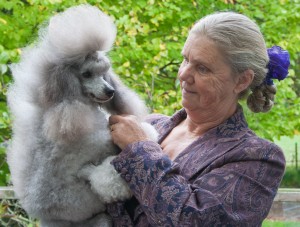 Life started in Australia where I show dogs with my parent under the FRAVAL prefix we had a few different breeds including poodles {Miniature] which were my first love. I also competed and instructed in Obedience.

After leaving school I worked as a vet nurse and then ran a grooming business in conjunction with the boarding kennels operated by my parents.

After my marriage in 1978 I moved to NZ with my NZ husband  Gilbert, and dogs were going to be in a past life [except for a spayed chocolate poodle and a greyhound that came with us] no doging  only lasted a short while{3mths] and I was back grooming not long after that I was back in the show ring handling .

A Bichon was gifted to me from Australia in 1981 for help that had been given in introducing the breed to Australia so started my Dog Showing in earnest again. It wasn’t long before another 4legged member of the family was purchased. Then came the kennel name WHITOUT

In 1991 I bought my first Poodle in New Zealand a beautiful chocolate boy Ch Seabreeze First Edition about a year later he was joined by a wee chocolate girl Ch Seabreeze Solitaire these were my foundation dogs.

Over the next few years Bichons were phased out and more poodles were kept these proved to be better suited  to our life style now with 3 children. After the family grew and left home my interest in the poodles change , but only to the different colours. Apricots were imported in 1996 and silvers and blues in 2006. A red bitch was imported to improve the colour of the apricots. As you can see colors are our passion while trying to breed for type.

Our daughter Erica has carried on my interest in poodles becoming a competent groomer and handler. she is the third generation of my family in the show ring.

We now have a good breeding programme trying to keep the colours true. But very occasionally have to outcross. We have bred many breed champions and quiet a few obedience and agility title holders.

We now live on 16 acres in the country where the dogs get plenty of romm to be dogs while this is good for the dogs it makes more wore keeping show coats.